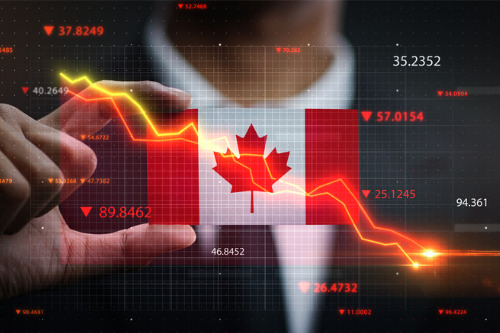 What to expect from Canadian job data?

So far, employment rates are still 3.1% below pre-epidemic levels, or about 600K jobs, while the number of long-term unemployed fell by 9.7% from a record high of 512K in January.

Labor market gains have been driven by the reopening of businesses, as closure restrictions have eased in most parts of the country. Bank of Canada said that even as other parts of the economy recover, it is still very concerned about the large number of people still unemployed due to the pandemic.

If we look at the Canadian economic activity, we will find that it expanded at its fastest pace in 10 years in March, as the Canadian PMI issued by the Ivey Institute showed a rise to 72.9 from 60 in February, and this is the highest since March 2011, and the second largest reading of the index since its launch in 2000.

All sub-indices registered an increase, including the employment component, which rose in March to 62.7 from 54.0 in February.

In general, the Canadian economy performed well, supported by higher oil prices and increased demand from the United States, Canada's largest trading partner, during the first quarter of the year, as Canadian Trade Balance data showed an increase in exports to the United States while Canadian exports declined. On the other hand, despite the recent decline in oil prices, they are still at very high levels than they were at the beginning of the year.

Job numbers last month showed just how much companies have adapted to restrictions imposed on economic activity in an attempt to slow the spread of the Coronavirus. Most of the expectations are that the labor market will add more gains in March, and today's data comes a week before the release of the budget which employment data is expected to be used as a measure to determine the planned stimulus measures.

As for the USDCAD pair, it is moving within a descending channel on the 4-hour chart, and is testing the downtrend line in it, slightly below the resistance level at 1.2629, and with positive data it is expected that this will support the Canadian dollar, and we may see a decline for the USDCAD to levels of 1.25, and maybe even the 1.2460 levels. If the data were negative, we might witness a breach of the descending channel, targeting the next resistance level at 1.2739.